Texas Senior Games Association is proud to announce the 2020/21 Hall of Fame Inductees.  Athletes will be recognized at their individual sporting events.

This group of seven outstanding young men have represented Texas on the hardcourts for over 20 years within the state and across the nation.  Practically undefeated in their TSG and Huntsman World Games competitions this group has consistently won because of their teamwork as well as their tenaciousness. At the National Senior Games, they also have excelled winning 4 National Championship titles during their 11 national appearances.  Only once did they not appear on the medal stand as a team, that in 2005 in Pittsburg, never to be denied again. This group includes Greg Layton, Steve Gilliland. Clay Hoster, David Gibbs, John Coles, Dave White, Larry Gatewood.  Individually, this group had been nominated for inclusion into the Texas Senior Games but declined until all seven of them were eligible based on participation requirements.  In the best sense, this is a team that succeeds because of teamwork and trust. They are also great living examples of seniors who are excellent on the court and within their respective communities. The Ball Hawgs will be the first inductees into the TSG HOF as a “Team”.  They would have it no other way.

This outstanding 78 YO track and field athlete learned how to throw the discus, javelin, and shot put by first picking up a 5 lb. weight, a piece of pipe and a motor part to prepare for the 2001 Kerrville Games.  Never having done any of this, he asked to borrow the implements to compete and sort of won all three events.  Moving on to San Antonio, he lost for the first and only time to a Texas thrower John Conniff in the discus.  He credits a TSG HOFamer Wendel Palmer for being an inspiration to work hard hoping to maybe one day becoming a Hall of Famer.  Overcoming a severe shoulder injury from 2011, Jeff came back to the national stage at the NSG in 1917 in Birmingham and set a new national record of 131 feet (breaking the old record by 10 feet for the 75-79 age group).  That year he ranked 2nd in the world out of 175 competitors.  He also holds the 70-74 YO National Senior Games record set in 2011 while winning the NSG Championship. All this is not bad for a promising high school baseball player who found his way back to the winners circle by participating in the Texas Senior Games events.

This young lady has been a consistent TSG champion with also several National Games gold medals in her favorite sport swimming.  Kay has competed with distinction since 1999 in Houston and TSG offered events.  She competed in in 5 National Senior Games since 2001, missing only 2009.  In 89 TSG swimming events, she has only been beaten 6 times. At Nationals, she has earned 4 National Championships, 13 silver medals and 8 Bronze.  Not too bad for a young lady who started out teaching, organizing and training teachers for Red Cross swimming lessons in 1969.  Plus, she did it all for free.  She did this for over 25 years.  Kay has been a role model for swimmers of all ages for over 20 years.

This senior member of 2020’s Hall of Fame Inductees at the age of 93 is an unrivaled archer on the state and National Games levels.  Like Robin Hood…his specialty is barebow. David Boyles has competed in the TSG since 1994 and the National Senior Games since 2001 with excellence.  He is an ambassador for archery and the Senior Games in other states besides Texas…like Arkansas.  He also has brought others into the sport (s) including his daughter Karen Davenport.  Just to prove he is only human David also has competed in golf at the Texas and National Senior Games.  And he did not do as well with his highest place being a bronze in 2019.  In closing, this person is not being inducted into the Texas Senior Games Hall of Fame because he is older than most at 93. David is clearly a great archer and has set National Age Group records with his archery in 2009, 2011 and again in 2019.  I am not certain, but David may also be the first archer to be inducted into TSG HOF.  In all ways, this inductee is right on target.

Dean Wilkinson could be called The Godfather of TSG biking, plus Godfather though out the great state of Texas.  Dean’s work has been not only as an athlete but a contributor to the growth of this sport.  First, Dean has served three discreet 6-year terms on the Texas Senior Games Board of Directors since 2000.  He is a leader in developing, conducting and publicizing numerous cycling events throughout the great State of Texas and the Midwest.  Second, he has also played this conductor of cycling events role in the Arkansas State Games.  In fact, Dean has been spotted in Senior Games events in Oklahoma, Mississippi, Florida, Kansas, Nebraska, and the Rocky Mountains.  Guess he was looking for a challenge and a few new hills to climb.  Thirdly, Dean has been competing as a cyclist at the TSG since 1999 and on the National Senior Games level since 2001, often being a top medalist at local State and National venues. For example, at the latest National Senior Games in Albuquerque, won 1st place in the 10K Time Trial, 3rd place in 20K Road race, 2nd place in the 40K Road Race, and 2nd place in the 5K Time Trial.   4 medals in 4 events. That alone tires me out thinking about doing all those events.  But not Dean!  He just keeps rolling along, helping others along the way.  Bottom line is that we are all thankful for Dean’s willingness to compete and lead cycling for Texas Senior Games. 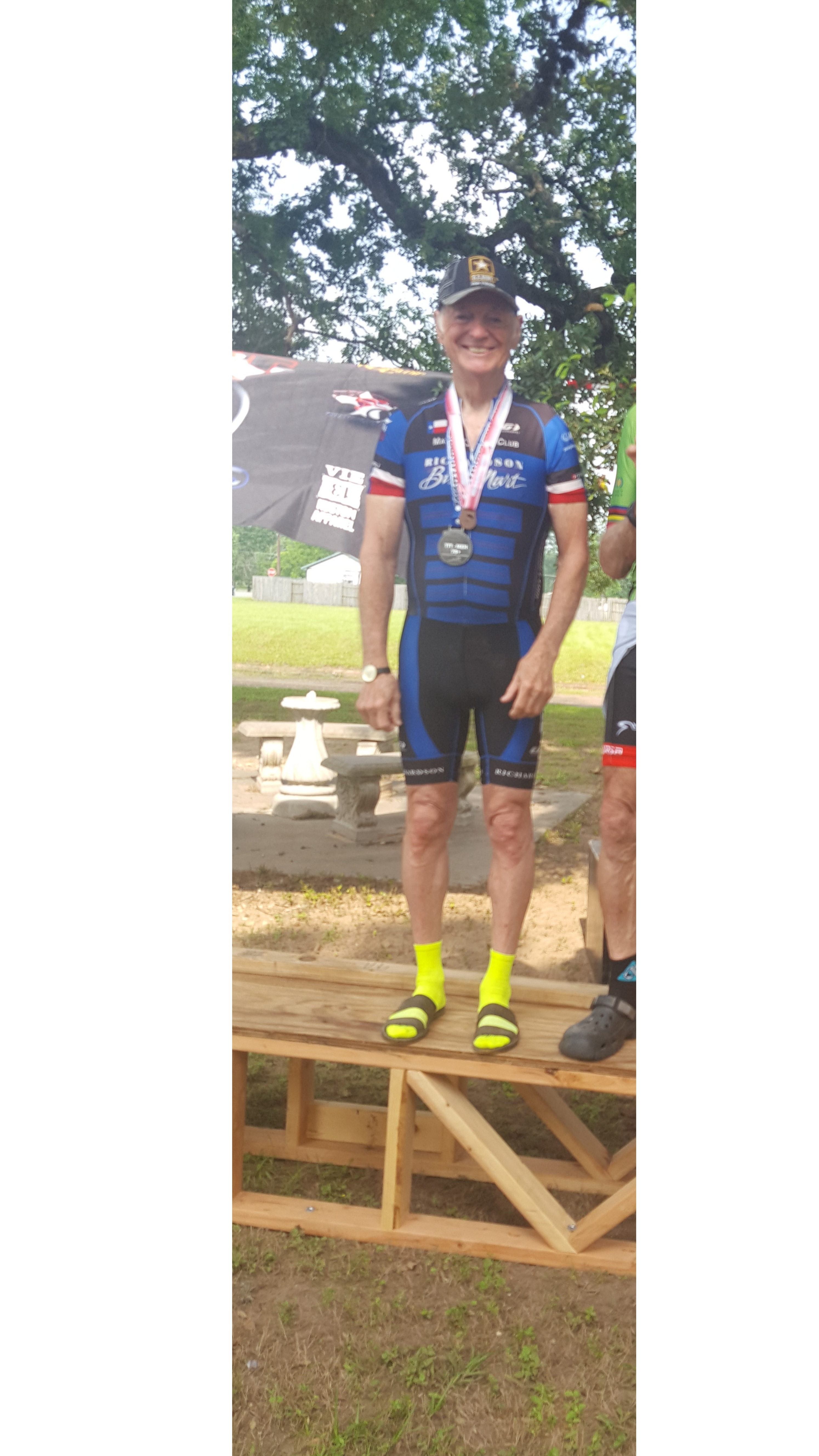 This 60 YO young lady has been a strong supporter of TSG even before she could compete. Susan runs our Annual TSG swim meet with grace and a professionalism encouraging swimmers from San Antonio and across the state to participate, win medals and break records. This 60 YO is also an excellent swimmer having attended 4 National championships, winning 12 gold medals in the last two. She also participates in the TSG meets during qualifying years and has rarely been beaten if ever. But swimming is not her only sport as she has qualified for other sports, including shuffleboard. There may be other sports, but the bottom line is that Susan Ingraham is both an excellent athlete and a tremendous supporter of the Texas Senior Games. We are lucky to have volunteers like her helping us expand and improve our effective reach throughout Texas and beyond. 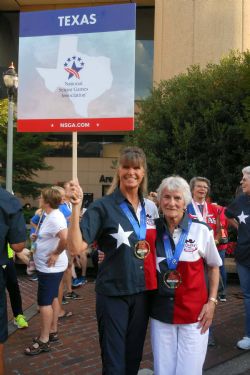